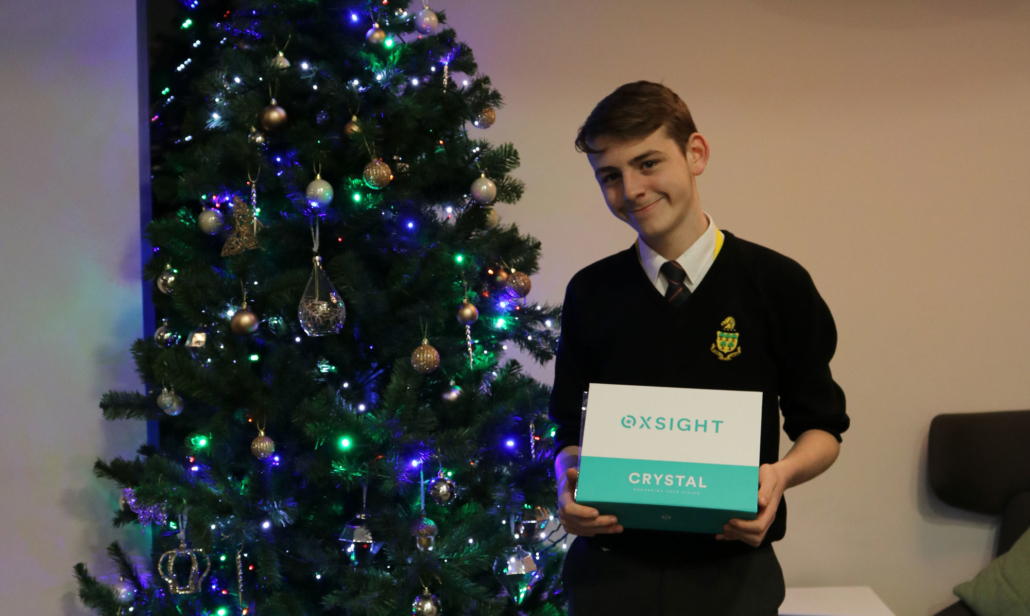 Giving the gift of sight for Christmas

Fifteen-year-old Callum from Swindon was surprised by his father which a Christmas gift which will allow him to see more clearly than he has in years. Callum has a degenerative condition called Retinitis Pigmentosa which causes peripheral vision loss and means that he only has 7% vision in his left eye and 10% in his right. The OXSIGHT Crystal smart glasses will enhance Callum’s remaining sight and widen his field of vision so that he is able to see his family more clearly at Christmas.

As well as using them over Christmas, Callum is looking forward to using the glasses at school and at the cinema. He says, “I had no idea I was getting them. It’s going to be so useful to me, especially in history class looking at textbooks. I’m excited to start using them.”

Following an event run by Retina UK and Moorfields Eye Hospital, Callum first tried the Crystal smart glasses at OXSIGHT’s Oxford clinic. He immediately responded to them, and told his dad, “I can see all of your wrinkles now”. That’s when Callum’s father hatched his plan to purchase the glasses as a surprise Christmas present. He says, “it’ll be great for him to use them when we visit his grandparents at Christmas. My mother can’t believe the technology, and my step dad was just blown away.”

Then over the Christmas period, BBC Wiltshire radio invited Callum and his dad to their studio to find out more. Here is their interview from BBC Wiltshire’s Driving Home for Christmas show.