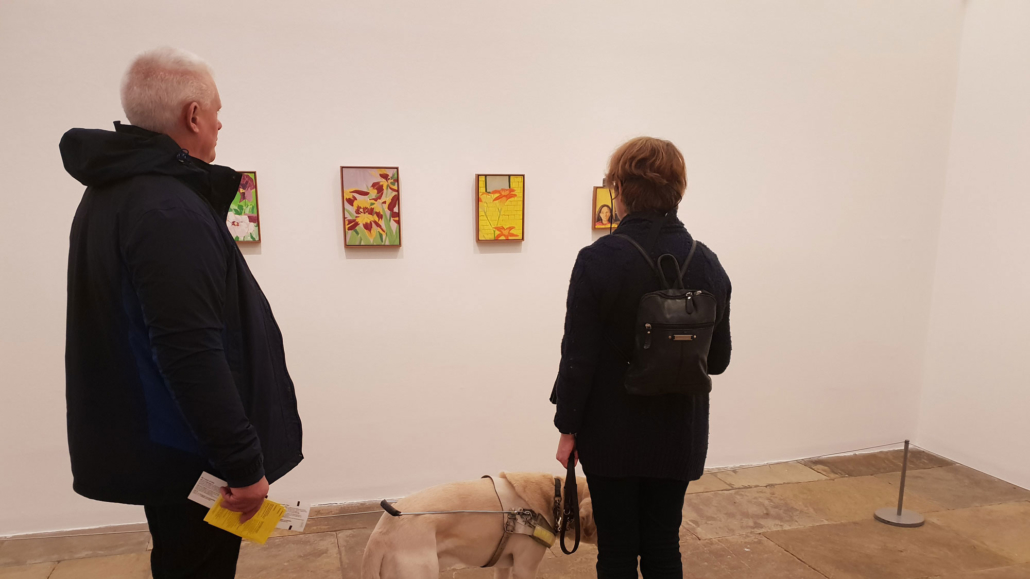 Anna has retinitis pigementosa and became an OXSIGHT Ambassador in December 2018. She is currently enjoying all the ways that OXSIGHT Crystal is enhancing her life.

My mum was very keen on art and, during a visit to Paris when I was 15, she took me to see numerous galleries — mainly containing impressionist paintings. I’ve had RP all my life and I remember being able to see more as a teenager than I can now, approaching 50. The difference is subtle — my field of vision has always been poor, but my ability to deal with light and dark has diminished.

These days, I often find galleries poorly lit and sometimes can barely make out what is behind the glass when I look at a painting. My long-suffering and patient husband has come with me on many occasions, but the whole experience becomes tiring and frustrating. So, I’d pretty much stopped going.

I’ve tried the OXSIGHT Crystal glasses in two galleries: The National Portrait Gallery in London and the Tate, Liverpool. The impact that they have had is wonderful. There was not a single painting in the Portrait Gallery that I couldn’t see. Even for dark paintings, I could tune the glasses so that the image became lighter and possible for me to view clearly. I could zoom out, look at a wall of paintings with a couple sweeps of my eyes, then zoom in on the painting I wanted to focus on.

The good thing about the Portrait Gallery was that I knew every painting would contain a face, although some of them were a little confusing. The Liverpool Tate, with many modern paintings, was a little more challenging but I still enjoyed my visit very much.

In the Tate, some paintings were huge and I would start by minimising them to as small a size as possible so I could see the whole picture with just a few movements of my eye. Without the glasses, even if I had good enough light to see a painting clearly, I would need several minutes to scan over it as my field of view is so low (about three degrees). I explained to Rammy from OXSIGHT that if he imagined each painting as being a jigsaw made up of 100 pieces, I could only see about three of those pieces at any one time depending on how close I was to each painting and its size. So, on this basis, my eyes would have to move over thirty times to take in a whole painting. At one point, I was asked to turn and look at a painting. I did so, and said “Do you mean the round one?” Then I realised this was something that I wouldn’t usually say as, in normal life, I can’t just glance at a painting of an average size and determine what shape it is as I see so little of it at any one time. But, with the glasses on, I did this without even thinking.

I went to the Tate last weekend and many of the paintings are still clear in my mind, particularly the colours. The paintings were often more difficult to discern than the portraits I’d seen in London, but it didn’t seem to take my companions long to get me to the same level of appreciation that they were experiencing — a minute or two perhaps. Some pictures, less than 10%, I didn’t grasp but I imagine that modern art can be like this for everyone. With an audio guide, which the Tate didn’t provide for some reason, I think I would have been right up there with the sighted visitors.

Two very enjoyable visits, and further proof that art galleries can now play a more prominent role in my life than they did before. And especially pleasing as art was something that my Mum had wished me to appreciate.